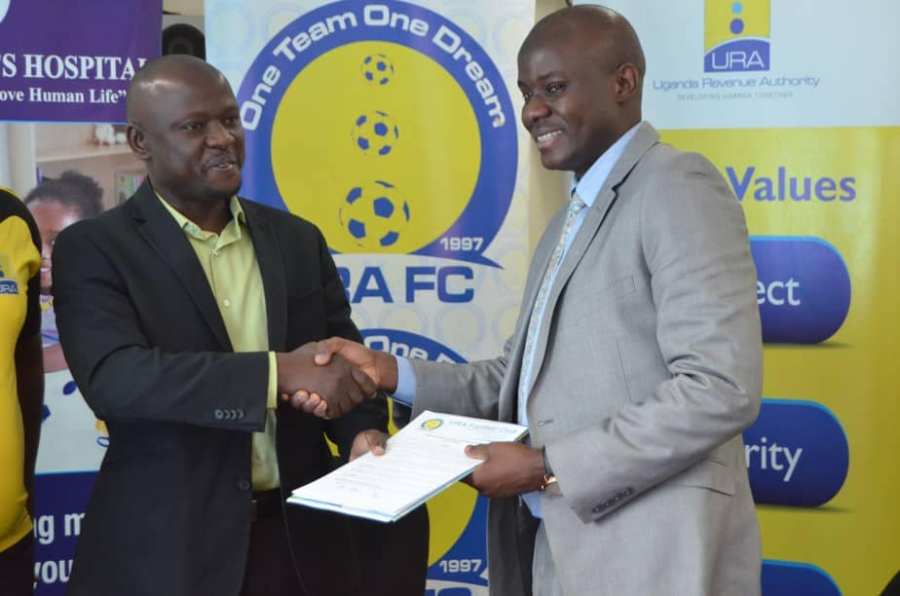 Ivan Kakembo during his tenure at URA Football Club. He completely turned around the club’s secretariat and lured on board partners as Rwenzori Mineral Water and Football For Good Academy (now Ascent)

More than seven months ago, URA Football Club management zeroed on seasoned football administrator Ivan Kakembo as the suitable person to steer the club’s operations of the secretariat as the Chief Executive Officer (CEO).

Mid the second half of the 2018-19 season, the club officially opened up their independent secretariat wing away from the main-stream operation of the authority.

There is now a fully furnished office at Nakawa, Kampala – that thinks about the development of the game at the club 24 hours a day, 7 days a week and 54 weeks every year.

The long-awaited kick-off of the 2019-20 Star Times Uganda Premier League season is around the corner and only URA FC alongside new entrants Wakiso Giants are assured of their slots having attained full licenses.

Kawowo Sports’ David Isabirye finds out the gains and pitfalls about URA FC’s Ivan Kakembo, the fulcrum of play at the club secretariat.

Question: Humbled to meet you. First and foremost, who is the person of Ivan Kakembo?

Kakembo: I am a FUFA Certified Club Chief Executive Officer (CEO) having successfully graced the FUFA Administration and Management Course. I am also CAF / FUFA Club licensing certified, an expert in Commercial and Contract law, a consultant as well as a players’ and coaches’ representative. My leadership face-board casts a corporate international image, creating and fostering a high-performance team to ensure efficient reporting structures. I have a sound commercial and operational judgment with key decision-making capability to provide clear and supportive leadership to all employees. As a previous CEO at Sports Club Villa between 2014 to 2018, I revived the club fan base back to stadia, secured the StarTimes sponsorship, built a strong club Public Relations System with club branding of up to 30,000 media contacts and ensured international player sales. I have also worked as CEO at Nyamityobora and as a player recruitment analyst at the University of Pretoria.

Question: In a nutshell, narrate your journey at URA FC thus far.

Kakembo: The operations of the Secretariat Office for the last six months under my supervision as the Chief Executive Officer (CEO), comes with a lot of considerations in regard to the workforce employed and other supportive energies towards better club governance and management of the day to day activities.

Question: What prompted URA the authority to have in place an independent secretariat?

Kakembo: This was the introduction of an organogram upon which the club structures into a professional set up that is recognized by the Federation of Uganda Football Associations (FUFA). Therefore, an independent and functional Secretariat office was set up that works closely with the club board and currently sits down at a known station point to plan for the club development unlike in the past. Previously, we were housed in the fleet office with a lot of interruptive communications that were not football oriented. We have introduced the QR Codebase ID’s for secretariat staff and technical team that will further improve ease tracking of office and field attendance to ensure staff effectiveness.

Question: What has been the priority area of concern for your first tenure in office?

Kakembo: We have re-organized the club management entity and got it registered and updated at the registrar of companies and at FUFA. We have hired a vibrant media officer that has helped the club to take over all football media, online and print media. This has improved relations. To that effect as well, a new and better website outlook has been developed by Perk Events Limited to extend the Mileage for our sponsors and general club concerns on social media platforms.

URA FC Chairman James Kizza (left) hands over documents and instruments of power to the new club CEO Ivan Kakembo at Nakawa, Kampala Credit: URA FC Media
Question: Has this been reflected in the performance of URA FC?

Kakembo: Surely, as a result of good club governance, the club has continuously improved in performance from the 7th position to the 3rd position during the previous season.

Question: What makes URA FC tick and to rhyme with the FUFA Club Pro Agenda?

Kakembo: I have personally drafted the Club FUFA Compliance documents for club licensing next season and all these are now pending club board approvals. They include the club business plan, club statutes, club communication code, club financial manual, club human resource manual and club job descriptions as well as policies. We have re-organized the financial structures at the club required by the club Pro-Agenda requirement from FUFA. We also obtained a club account compliant to FUFA requirement to manage football financial resources and accounting processes to FUFA. We have organized match day gates and all collections accounted for and banked with all documents available upon request.

Ivan Kakembo on duty at the Uganda Revenue Authority (URA) FC Secretariat offices
Question: URA FC secured the 2019 – 2020 FUFA full licence without any hustle and easily. What is the magic?

Kakembo: For the first time, the club received full player licenses to participate in the Star Times Uganda Premier League without any delays. We organized players’ employment contracts to match the FUFA requirements hence the stability in the league performance. All this is not by accident, but rather by planning and my expertise.

Question: What is boiling for URA FC in terms of sponsorships?

Kakembo: We are working closely with over 50 companies that have the capacity to engage in Football sponsorships and results that will be visible soon. In line with the above, we are finalizing with a famous kits manufacturing firm, Umbro.

Kakembo: Yes. For the first time, the club managed to sign a player without sign-on fees – thanks to the three year partnership sealed with Football For Good Academy (FFG). We have a long term partnership with a possibility of this Ugandan – Canadian Funded Football Academy that will support youth players pathways into the senior team and the Bugema project.

Kakembo: For any successful institution, the right structure is the way to go.

At URA FC, we have the club chairman (James Kizza) and his working board.

As a club Chief Executive Officer (CEO), I head the club secretariat (I am assisted by the personal assistant).

Question: URA FC’s fan base has failed to grow over the years? What is in stock to improve this scenario?

Kakembo: Indeed, we have had the challenge to grow the fan base for the club. Currently, there are means being undertaken to recruit as many fans as possible. Besides community engagement, recruitment of fans from on-line avenues, the company has a policy of promoting the club regalia. For instance, there is a directive every Friday that every employee at URA has to come dressed in a URA jersey.

Anwar Ntege smiles as he signed the employment contract at URA FC. He joined from Ndejje University Credit: URA FC Media
Question: Lastly, what are some of the grey areas and challenges faced thus far? Also, there was loose talk about people questioning your potentiality.

Kakembo: It has been very hard for the staff that I found in the club secretariat to adapt to the new transition for the club to go professional and have insisted to involve themselves in club political fights. I am a clean gentleman who was vetted and deserved the job. Also, stakeholders like the fleet officer have failed to embrace the new professional football management set-up at the club and still feel entitled to participate in the club day to day affairs. One Team, One Dream.

In 2000, it merged with Lyantonde Football Club.

They have also represented the country regionally in the CECAFA club cup and on the continent in the CAF Champions and confederation cup.